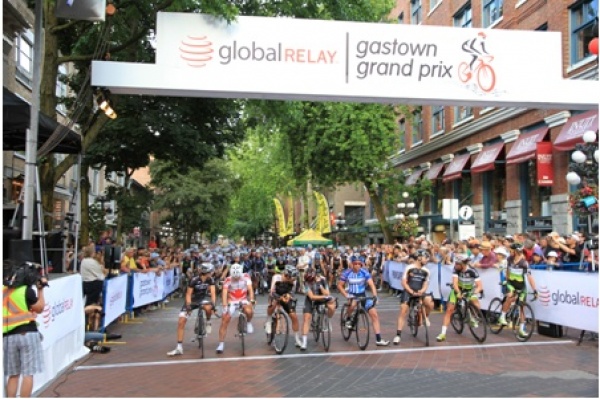 PureBlack Racing showed great form from the get-go of the 60km criterium ensuring their presence was felt up the front early on. The race was held in front of a 30,000-plus crowd who took the opportunity to see high-quality racing in the central city on a balmy Vancouver evening.

“We rode such a good race today,” said Director Sportif, John “Harry” Harris, “everybody was getting in there and they all really worked extremely hard.”

“Joe [Cooper] had an amazing race, he was up there in the front, and we picked up some primes, and collect some prize money.”

Unfortunately it was not to be for the team who has been fighting so hard to gain a podium finish over BC Superweek.

“It was a really hard course,” said Roman, “The rough cobblestone roads make it hard on your back and the two really big corners in the course made everyone slow down making it hard to gain momentum.”

Despite the combination of tight corners and cobblestones, Gastown Grand Prix had far fewer crashes at the previous criterium at BC Superweek.

“The team really turned it around tonight,” said Harry, who is just relieved that there were no crashes, “I am rapt, you have no idea, it has been a tough few days, I have been stressed to the max literally picking my men up off the road.”

Gastown Grand Prix officials had asked local authorities to increase the speed limit around the course to 65km/hour for the event.

BC Superweek continues with the Giro de Burnaby at 7.15pm on Thursday (Vancouver), or 2.15pm on Friday (New Zealand) time.

PureBlack Racing have ended their six-week long block of racing in Canada on a high, after Joseph Cooper held off a number of pro-team cyclists to take second in the final stage of Tour de White Rock.