"You're never too old to make mistakes" - I wish I had thought of this a bit more in the days leading up to the Cairns 70.3, but I guess complacency and 20ish years of good mechanical luck lead me to make a few simple, but costly, errors. 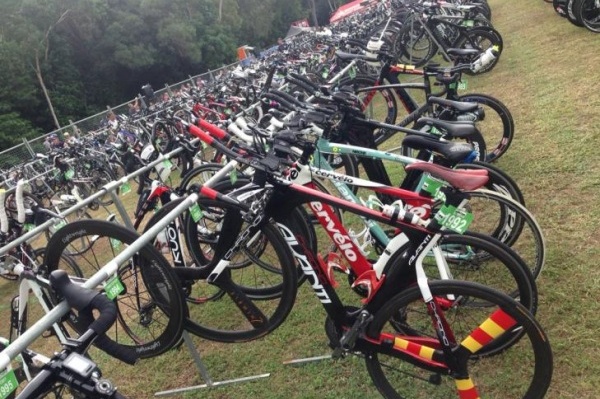 Let’s just say, I’ve learnt my lesson and I will be paying extra attention to my equipment in the lead up to my next race.

Race morning was wet and cool. Nothing to really worry about, but it was just going to be uncomfortable, more so for the spectators than the athletes though. I really enjoy the challenges of inclement weather conditions, and I think Kiwi’s are bred to deal with whatever gets thrown at us. The proof of that is why there were so many NZer’s on the pro and age group podiums in both the 70.3 and Ironman races that day.

I was determined to reach the podium for my Age Group in this race, and I was pretty confident in my fitness. I had tonnes of base, but not much strength or speed, but I figured that was still going to get me in with a shot.

The swim course was going to be a great test of strength, navigation and confidence. We had a few good sized breakers to negotiate before getting into a nice clean rolling swell. I was in one of the last age group waves so spent much of the swim navigating through the slower swimmers from the earlier waves. Fortunately it was fairly well spread out.

This is where my first mistake came. I have my own neoprene Blue Seventy timing chip strap that I use around my ankle, and I have ALWAYS used a safety pin to keep it in place just in case it gets pulled off my ankle by a following swimmer. For some reason I didn’t go with the safety pin this time, and that coupled with the fact the Velcro was very worn out, meant that the inevitable failure was about to occur. Just as I felt it slip off I flipped over and managed to hold on to the strap by my toes, and in a freak moment of luck, balance and control I grabbed it and reattached to my ankle. As I came out of the water I heard from Kellee I was 7th! Awesome, great news, excellent swim for me.

Straight through transition I got to my bike and worked my way through the mud and traffic. Once on the bike I was eager to find anyone around me in my age group. We had a crazy tricky serious of judder bars to get over early in the bike and I was very careful not to crash or lose my nutrition. Once on the highway I waved goodbye to two uber-bikers from my age group as they stomped past me, but I also passed a few of my age group in the first 30km. I had intended to hold back until this point, and I was happy with my energy levels and pace I was holding. I made the decision to pick up the pace, and I worked with another guy in my Age Group as we kept the pace high and steady. I figured I had moved up to about 4th in the age group by the 60km mark. My bike was humming along, and rolling over the undulations beautifully, the slight headwind didn’t even feature. The Avanti Evo2 is built for these conditions and roads. All I had to do was stay aero and not let up. The final 30km I had planned to ride as hard as I could, as the closing stages of the bike is usually where I feel my best. I had dropped my companion and I had passed one of the earlier Uber-Bikers, who must have pushed a bit hard. I had moved up to a strong position, and I was confident of having a good run.

Cue mistake number two. At 80km I suffered my first ever flat tyre in a race. What are the chances on brand new tyres? With the rain came a whole heap of glass and grit on the road. A lot of people had been getting flat tyres, so I guess my years of good luck was up. I was carrying a gas powered sealant to quickly repair the puncture, but just my luck it didn’t stay up as long as I needed it to, so at the 85km mark I jumped off my bike and started running it in. Now if I had made the very simple decision of carrying a spare tyre with me this would have only been a blip on what was going to be a very good race for me. But in a moment of laziness the day before I didn’t feel it was necessary to take a spare, opting for a lighter and more aero setup. IDIOT!

During my 5km run to the end of the bike I was able to reflect on the decisions I had made, and vowed to make sure I didn’t make that mistake again, and I will be able to prove to my athletes the importance of carrying spares with them. I was totally gutted, and embarrassed that this had happened, but I was glad I didn’t toss my lollies and pull out. I had mates doing the full Ironman, and were going to be suffering a lot more than me, so I was bloody well going to finish it. I finished the bike in 37th place, so had lost a heap of places. Running is a great way to kill your average speed, and I had gone from 38kph to 32kph in the space of 5km. The real downside of this run was that I was barefoot, and by the time and jogged across the line at the end of the bike my calves were tight and my feet were bruised....awesome, let’s run a half marathon.

Cue mistake number three. Not that it was going to mean much by this point, but I like to have my Magellan GPS watch to run with. It gives me an idea of how I’m going and something to focus on. But my battery was dead-flat, so this was going to be a blind run. It actually didn’t go as badly as I had expected. I was wearing a very light, flat New Balance racing shoe, which usually are pretty unforgiving and aggressive, but compared to the hard pavement when barefoot these were like a pair of nice soft slippers, and I was really enjoying the run. I had moved from 37th to 21st in the Age Group, and my competitive nature meant I had to sprint down a guy in my AG just before the finishing chute, probably annoying to him, but a small victory to me.

So I left the Ironman 70.3 Cairns not disappointed, but actually more circumspect about taking care of the small things. A few lazy decisions and not checking equipment prior to the race cost me dearly in the end. I had a great time at this race and I really recommend it to anyone who wants an early winter get away. The training in NZ leading into it is really good, so it isn’t that hard to get out and bank some miles. I’m certainly going back next year, I have a score to settle.