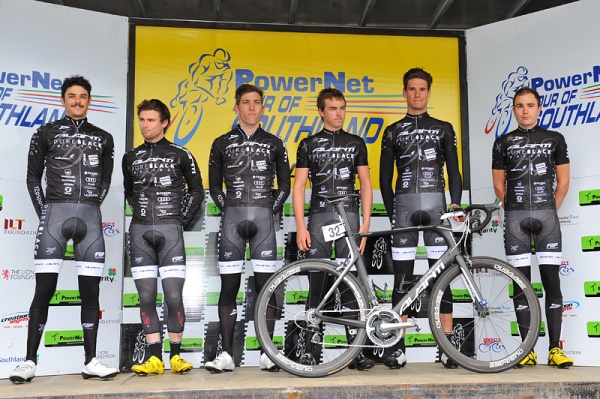 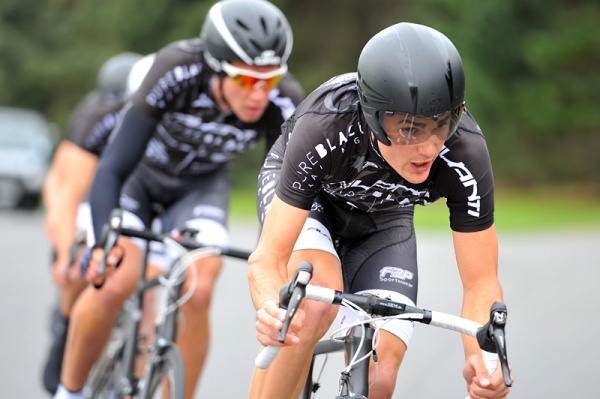 Sunday 28th October: PureBlack Racing made a strong start to the PowerNet Tour of Southland finishing fourth in the 4.2km Team Time Trial.

Director Sportif, John “Harry” Harris, is happy with the team’s race today where they finished less that two seconds behind the winners Team PowerNet, with a time of 5:06:06.

“It was great to finish within striking distance of the other teams,” said Harry, “The only thing in it [the stage] is a bad corner.”

“To produce a time like that when you have a rider from Canada and Australia who haven’t raced with the team at all is just really good.”

Team Captain, Roman van Uden, said the flat course was a good first hit out for the team but coming fourth with such a small margin is hard to deal with.

“We are disappointed with the fourth place, we made a few errors but with the guys on the team who have just joined us this was going to happen, it was still a good race,” said Roman.

“It is hard to ride a Team Time Trial when this is the one of the only times of the year we have had to ride one, so in that respect our result was really good.”

“Roman and Jimmy really took control of the time trial and did very well,” said Harry.

Tomorrow is the first real stage of the Tour of Southland with a 160km race from Invercargill to Lumsden.

“The stage will be about teams trying to position themselves, no one will want to take the Yellow Jersey this early but there will be key riders looking to get into key breaks,” said Harry.

“We will definitely be looking for a top five result tomorrow.”

The course features 17 sprint premes and four KOM premes over rolling hills that do not elevate enough to have any major climbs over stage one.

Next: Nicola Leary 3rd at Cape To Cape Epic

Another 'choice as' day in WA!