Punctures, Crashes and Wind Mar Stage Four of the Tour of Tasmania - A double stage day yesterday created plenty of drama for the riders competing in the CAT Underground Mining Tour of Tasmania. 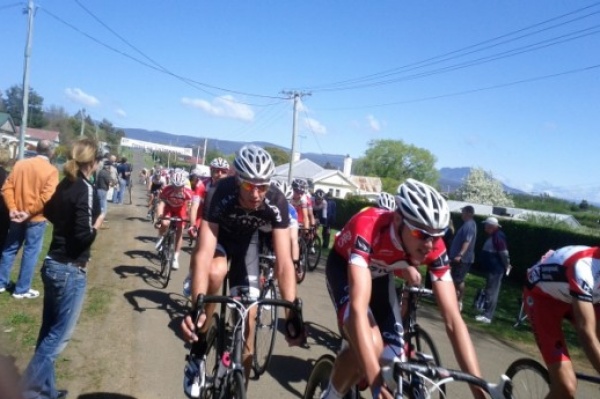 The morning stage was a 42km criterium in Westbury; with Mother Nature looking like she was going put on a great day for the riders, but the wind soon eventuated causing mayhem.

With 10 laps to go Jimmy put in a mammoth effort to bridge across to Joshua Taylor (GPM Wilson), who had made a solo break and went on to be the eventual stage winner, but was dropped with 8km to go.

“Jimmy rode really well, he was just going so hard to make up the gap and couldn’t hang on in the end,” said Roman, “It was a hard criterium along long and narrow roads.”

The afternoon course was just as difficult with crashes, punctures and 70km/hour winds all getting in the way of the team’s shot at a top ten finish.

The stage started in disaster when there was a crash 100m into the neutral zone. A rider from Plan B Racing fell hard and broke his collarbone, taking PureBlack Racing’s, Taylor Gunman, down with him.

Taylor needed a complete bike change after the crash and fought hard to get back on the bike and keep racing.

“He hit the ground hard, a bike change in the neutral zone is just brutal,” said Director Sportif, John “Harry” Harris, “It is unfortunate for Taylor that he got caught in the crash, he is the kind of guy that just wont give up easily and he wanted to keep going.”

Out of the neutral zone and within the first 10km of the stage, the cross winds had blown the peloton to pieces.

Roman and Taylor found themselves in the lead bunch of around 30 riders. Roman featured early, claiming the first KOM preme and second in the next.

The cross winds eventually turned to head winds allowing the second bunch of riders to gain back time on the first bunch with only 30km to go.

It was at this point where the injuries took their toll on Taylor and he had to pull out of the tour.

Roman continued to fight a hard battle and was racing well until bad luck struck, and he was caught in a spill and puncture at the bottom of the 17km final climb.

“It is horrendous trying to ride back into a 17km climb after puncturing,” said Harry, “We had a hard day on the bike but it has been some really good racing.”

Dion Smith and Joshua Aldridge fought a hard battle to finish in a respectable 24th and 25th place respectively, just over six minutes behind the winner.

“Dion and Josh rode like champions in the conditions today, they both had a really good ride,” said Harry, “It was four degrees at the top of the mountain finish, it was not an easy day.”

Today is another double stage day with a 24km criterium in Ulverstone at 2pm NZT followed by a 75.4km road race from Ulverstone to Penguin at 4.30pm NZT.

“Tomorrow’s [Friday] road race is going to be another lumpy day but is another day for the team to keep fighting,” said Harry.

Next: Tour of Tasmania Stages 5 and 6