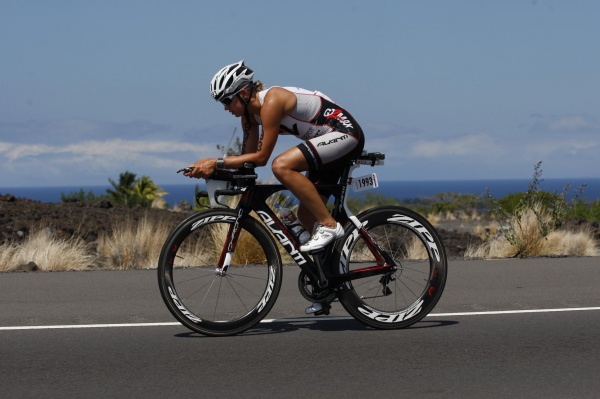 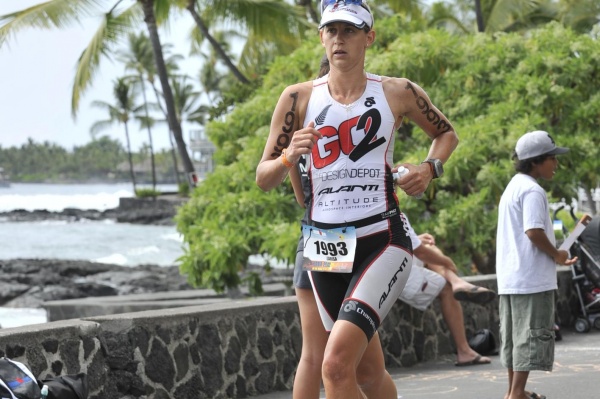 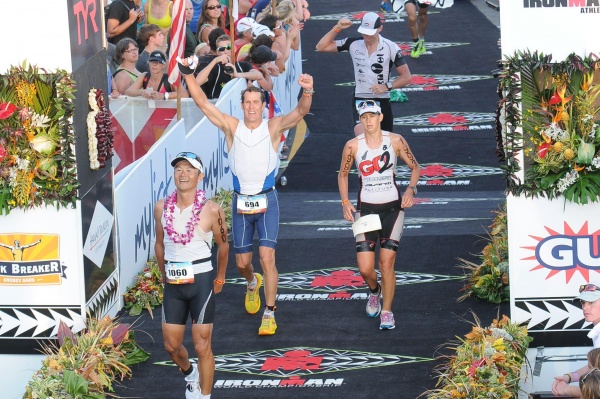 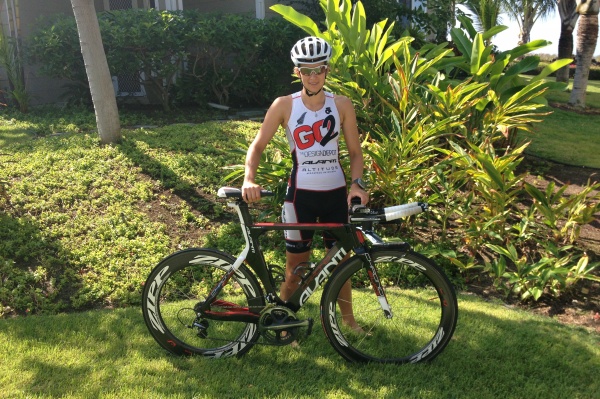 Race day Saturday 13th October was the culmination of 5 months of training through the NZ winter and 3 weeks of heat acclimatisation in Kona, Hawaii. 2011 was my first attempt at the Ironman World Champs and 2012 was all about heading back to Hawaii with greater strength and fitness in an effort to improve on my 2011 performance.

I came into this year’s race as the youngest of 54 competitors in the 25-29 age group so I knew it was going to be tough but I was confident that I had had a great build up and was excited to be racing again.

On race day I entered the water pretty early to get a good swim warm up and position myself well for a clean start. Last year I started too close to the buoy line and got smashed around quite a bit which made for a frightening experience and one I wasn’t keen to repeat! I was much more confident in my open water swimming and got myself into a good spot close to the front only to be stung by a jellyfish 10min out from race start! It gave me a bit of a fright but I was in such a good head space and so excited to be there that nothing could ruin my day!

I got away to a great start and settled in to a nice rhythm pretty quickly. The swim seemed much less aggressive than last year and the turnaround buoy had arrived before I knew it. With 300m to go you can start to hear the roar of the crowds so it’s pretty hard not to get excited! I put my head down and kept pushing to finish the swim strong. I exited the water up the steps into transition and a quick glance at the clock showed a swim time of 1.03, I couldn’t help but smile, a 6 minute improvement on last year, stoked!

I was greeted in transition by my cousin, who was volunteering in the women’s change tents, another smile! I shoved my gels in my back pocket, helmet and sunnies on, grabbed my Chrono Evo II and I was off. The bike ride starts with a small loop though town before heading up Palani Hill and out on the Queen K Highway to the turnaround at Hawi. I had planned to push the first 25km of the ride pretty hard to get myself in a good position for the rest of the day. I felt great and everything was going to plan.

The bike section of the race in Hawaii is like no other. As a World Championship race, it is the best of the best from around the world competing and as a female it is easy to get frustrated with the streams of age group men passing by. I knew I had to remain committed to my race plan and not be put off by what was going on around me. I kept focussed on my pacing and nutrition along the highway and soon enough I had reached the bottom of the climb to the turnaround point at Hawi. The next 30km section of road is a steady uphill climb with the characteristic Hawaii trade winds whipping at your side. On race day the cross winds weren’t nearly as bad as what I had experienced in training but instead a fairly solid head wind. I put my head down, and kept at it.

The head wind to the turnaround meant one thing, a pretty awesome tail wind on the way back!! This was my favourite section of the ride, 10km of down hill, tail wind with some unpredictable crosswinds to blow you all over the road. As a confident bike rider and the exceptional side wind handling ability of the Chrono Evo (that bike was made for this race!!) I was able to stay in the aerobars while many others couldn’t.

At the bottom of the hill it was a final turn onto the Queen K Highway for the 65km return leg through the lava fields back to transition. Because of the way in which the lava rock heats up during the day, the wind patterns change throughout the day and create what is known as the “Kona double head wind”. That last 65km was a bit of a grovel! It is at this point that you remind yourself of all the tough training sessions in the wind and rain and be thankful that although it’s a battle in the wind, at least it’s sunny! Head down and keep pushing though.

I reached T2 with a ride time of 5.35, a bit slower than I had hoped but still a 5 minute improvement on a much tougher day. I handed my bike to a volunteer and made my way through transition to pick up my run gear. Shoes on, visor on and fuel belt bottles into my pocket, just a marathon to go! Running out of transition with crowds of people either side was pretty exciting, another smile! The first 16km of the run is out and back along Ali’i Drive. The road is lined with supporters the whole way and it’s very easy to get carried away with running faster than you should. I felt pretty comfortable and stuck to my planned pace, taking in cups of ice, water and electrolyte at each and every aid station to set me up for the remainder of the day.

The next part of the run involves a climb up Palani Rd (small hill that feels like a mountain at this stage of the day) and then an out and back section along the Queen K Highway. No longer are the roads lined with supporters, it’s just you and the undulating road ahead. This is where things got pretty tough! However it is at this point that I begin to pass the majority of age group men that flew past on the bike. A lot of them are walking or running pretty slow, its payback time! I reached the final turnaround and now it was home time!

Endurance is my strength and I was holding good running form, but in the last 10km everything is hurting and you start checking off the number of aid stations to the finish line. There were 2 girls in my age group running together just up the road and I was steadily gaining on them to be 1min 30sec down at 10km to go. Now was the time to knuckle down and push to the finish.

Turning back onto Ali’i Drive for the final 500m is a truly special feeling. The road is crowded with people cheering and the incredible atmosphere makes for an overwhelmingly emotional experience. You remind yourself that it’s the World Champs and how extremely privileged you are to be there. It’s an unbeatable feeling and you can’t help but soak it all up and smile :)

I returned to NZ just in time to watch the ITU World Champs in Auckland. It was great to see the worlds best Olympic distance triathletes race in our back yard and to support fellow kiwi athletes racing in the age-group race, many of whom I train with and have supported me in my Ironman journey.

After a couple of weeks rest, its time to get cracking back into training for the upcoming NZ season, can’t wait, its going to be great!