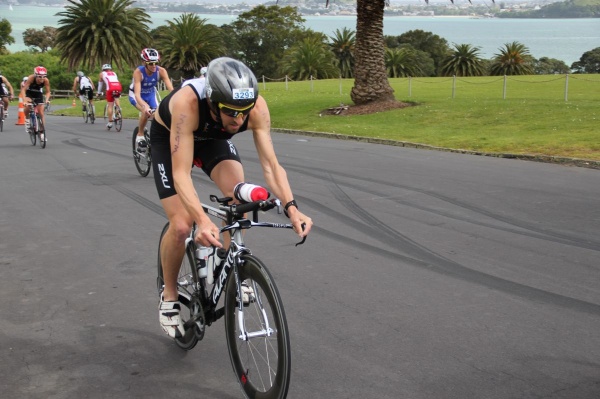 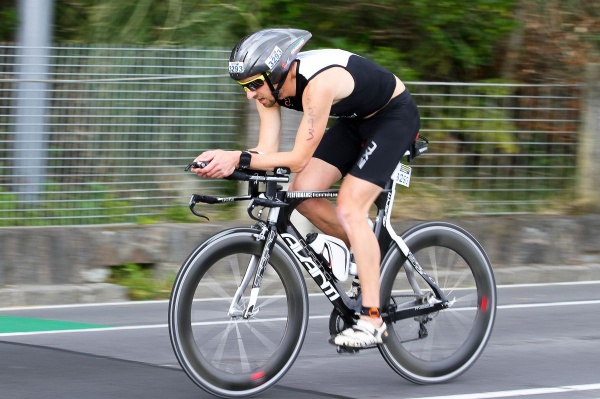 Having just raced the Leadman Epic250 in Bend, Oregon (5km swim + 223km bike + 22km run) 4 weeks prior to the Age Group World Championships (1500m swim + 40km bike + 10km run) I knew that I would be going into the later race much more a diesel engine than a speed weapon.  Two weeks out from the Worlds I decided I had better sharpen the pistons up and try to get some semblance of a turbo charger in the engine, so I enlisted a good mate of mine to take me on a few hard bike/run sessions with him.  I’m glad I did that because I needed every bit of that training come race day.

The Aquathlon World Championships were on October 17th and this proved an idea opportunity to get the head and body into race mode, all ready for the Standard Distance Triathlon on October 23rd.

During the Aquathlon I remembered how tough short distance racing truly is, as about 20m into the race my arms and legs were like jelly, and I hadn’t even taken a breath yet – that’s a good sign to start breathing.

I finally settled into a pace I knew I would be able to hold for the remainder of the race, but still with a bit in the tank for Monday’s race.  Before I knew it I was mounting the exit ramp and suddenly on my feet – wow, that went like a blur.  I quickly moved through transition and hit the run hard.  I don’t like mucking around in transition, and this showed with one of the quicker ones of the day.  The goal for the run was to settle into a pace that wasn’t flat out, but fast enough to be competitive and give me some idea of how fast to go on Monday’s race.  I actually had a great run for me, and moved through the field from 23rd out of the water to 11th at the finish.  I felt I could have run another half lap at that pace, and that’s about what I needed to do on Monday.

The few days between Wednesday’s and Monday’s race went pretty quickly.  I filled my time by hanging out around the race HQ and expo, (which was based at the cloud), and taking a few groups of international athletes on tours of the bike course.  This was great because it kept the legs loose and I was able to study closely how the weather would come into play on race day.

Despite the horrific weather on Sunday for the Elite Men’s race our day dawned fine and clear, but with a solid breeze.  I had an early morning pre-race run to start the engine and get the legs warmed up, and I felt pretty good.  I went through the usual warm-up ritual, wetsuit fitting and banter with the other athletes before filing down the ramp to the start pontoon...then I was straight into race mode.  I had a quick look at the sky and was happy to see the sun shining, and I noted the clouds moving swiftly from the west – this was perfect, I wanted a dry bike course but the wind from the west to make it as difficult as possible for those people not familiar with the course.  A westerly wind meant a head wind back to town at the end of each lap, but it also afforded a few sections of dead air owing to the shelter from the cliffs along Tamaki Drive.

I was snapped out of my focus when I jumped into the cool water to ready myself for the start.  I looked around, apologised to the blokes beside me in case I whack them during the melee at the start and got ready to fight.  I was surprised how clean the start was, and how fast we were going.....It was the World Championships so perhaps I shouldn’t have been so surprised.  As we made our way around the course I noted that the incoming tide was taking us off course a fair bit, but I decided to stay in my group rather than correct my line to the buoy.  I figured it was better for me to keep getting the advantage of the draft.  We turned and made our way along the back of the swim course and picked up the trailing wind, which pushing into the tide was creating some pretty nice swell.  I quite like a rough swim as it takes the technique out of it and relies more on strength and direction.  As I exited the water I noted a few people around me who were better swimmers so I was happy with my performance there.  My swim time did not reflect that well though, and I was disappointed to give up so much time to the leaders, but with conditions like that it was a day for the strong swimmers.

I transitioned as quickly as I could and was glad to get on the Chrono Evo2.  I knew this hilly course very well, and had determined the best way to climb the key sections – some out of the saddle, some seated in aerobars.  I also knew the descents well and hit them hard.  Once back on the flat again I pushed hard, but was a bit disappointed that my legs didn’t reciprocate – my HR was right up, but I didn’t feel very powerful.  This is the trade off for having been an endurance athlete for so long, so I just kept aero and rode as hard as my body would let me.  Before I knew it I was dismounting the bike and charging back through Transition, looking forward to a good run.

I felt really good heading out on the run and started picking people off.  It took me a couple of km’s to settle into a rhythm, but once I found my pace I dug in to hold it.  As I came to the end of the first lap I was lifted by the amazing crowd support, and to be honest I probably went far too fast through here, as once I was back in the ‘quieter’ sections of the course I realised that I was beginning to hit the wall a bit.  Lactic acid was accumulating and the legs didn’t have the spring of the first lap – here we go, this is going to hurt a bit.  I focussed on the guys in front and picked them off one by one.  I was happy to close the run strong, but I was completely drained.

As I was coming down the finish chute I gave myself a chance to look around, and see how lucky I was to race such an awesome event in front of an amazing crowd – this is exactly why I do this sport.  I am very privileged to have been able to race here.

On reflection of my performance in the Triathlon I am actually quite disappointed.  I came 22nd in my age group, but I thought I had a good chance of getting in the top ten after my Aquathlon result.  I was only 5 minutes off 10th place.  It really proved to me that to race fast you also have to train fast (that’s obvious really), but it’s more about getting your body used to utilising different internal fuel systems.  The bulk of my training is at an aerobic and tempo range, and not much at threshold or VO2max, which I would have needed to be more competitive.  So I have learnt a lot from this short stint at fast racing, and I will actually implement a bit more of that style training for my Ironman racing as I think it will actually be a great benefit to have some top end speed on tap.

I still don’t know which distances I prefer more.  Perhaps that’s a good way to be, I get to race anything I want.  Maybe I figure it out when I grow up.

Next: PureBlack Racing race a perfect stage to put Taylor Gunman in the Pink Jersey