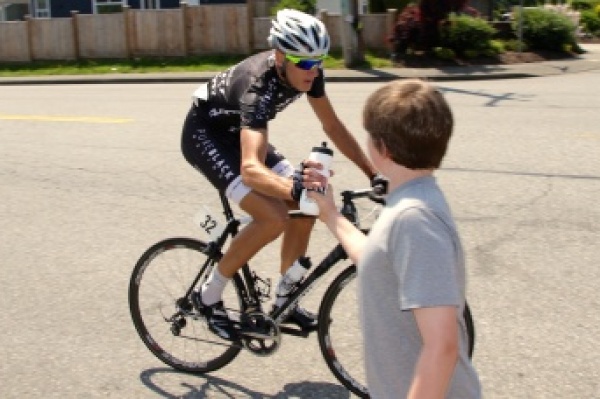 The final stage of le Tour de Delta was a 140km road race was held in bright Delta sunshine, with the heat quickly intensifying for the kiwis as the first break of the day left without representation.

PureBlack Racing spent the day hot on the heels of a group that bunched at time to a dozen riders; “Taylor, Jimmy, Louis and Joe were hitting for nearly 60km trying to bring back the peloton,” said Roman.

With most teams covered in the break, the boys in black were given the task of pulling in a sizable bunch stretching a lead of over a minute on the peloton. With energy levels running low in the closing 20km, Jimmy and Roman were the only riders still in the mix as finished line loomed – Jimmy crossed with a hard fought 4th, and Roman not far behind in 15th place.

“We are happy with the result in the road race,” said Director Sportif, John “ Harry” Harris, “but we really had to work for it today by pushing out in front, and bringing the breakaway back in sight.

“Jimmy had a brilliant ride today, calculating and intelligently.”

The thrills from the previous evenings criterium took it’s price on the team, with two riders carrying running repairs to the start line; “Unfortunately it was just a day where we couldn’t make it onto the podium; with Louis injured we just didn’t have the same horse power as the other teams,” said Harry, “Having a Louis not 100% in the legs takes its toll.”

Although the team has not had the podium finish they have been longing for over the three stages of le Tour de Delta, they have had a top ten placing on each day, with Roman finished 6th overall with Jimmy at 9th on the individual GC.

“Roman has done very well, he finished in the top ten, with his consistency paying off over the past three days,” said Harry.

“We have a day off tomorrow before we start three days of racing criterium,” said Harry “with a clear push for the podiums.”

The next race is the UBC Criterium, which follows cobblestone roads set in the landscaped grounds of the University of British Columbia. Following UBC Criterium, the team join the heralded return of a Canadian classic - the Global Relay Gastown Grand Prix in downtown Vancouver, where the team will have the opportunity to join past winners Lance Armstrong, Gary Anderson and Gord Fraser.

Next: UBC Criterium not meant to be

The UCB Criterium was not meant to be for PureBlack Racing after four of the five riders were caught in crashes and didn’t finish the race.