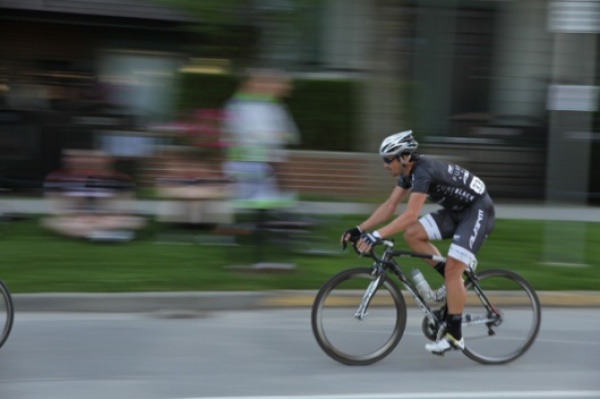 The biggest concern of the night was Taylor Gunman who was in a pile up half way through the course and was taken to hospital with concerns about his wrist.

“It was an unbelievable day,” said Director Sportif, John “Harry” Harris, “Four went down and there were about twenty crashes throughout.”

“It is pretty scary hearing people talking about broken scaphoids,” said Taylor, after being sent for an x-ray, “But I am lucky to avoid a break, and am looking forward to continuing racing.”

Taylor has crashed in three of the last four races, but takes a pragmatic attitude to his recent spate of bad luck; “If I was scared of crashing I wouldn’t be a cyclist,” Taylor joked, “I have a bit of skin missing and have left parts of my body around Canada.”

Taylor said the course was very narrow, and with 120 riders (of which only 30 finished) coming around those corners at high speed, crashes are almost guaranteed.

Joseph Cooper, who finished in the bunch, described the race as being challenging and competitive, the winner being Orica-GreedEdge’s local, Svien Tuft - a pro-tour cyclist who has recent raced in Tour d’Italia.

“There were a lot of fast, pin hair corners,” said Joseph, “It was a really hard race, and it makes it even more difficult when you are riding solo.”

Harry has pulled Taylor out of tomorrow’s Gastown Grand Prix as a precautionary measure.

“I have made the decision to pull him out, just like I did with Roman for today’s criterium. I want him to rest after getting banged around over the past couple of races,” said Harry, “he hit the ground really hard today and we need him for [Tour de] White Rock.”

“I am disappointed that I can’t race but it is good to be on the safe side so that I am still fit and 100% for Tour de White Rock and Scody Cup,” said Taylor.

The Gastown Grand Prix is held on the cobbled paths of historic downtown Vancouver. The race will be live broadcast at http://www.globalrelayggp.org/ at 7:30pm Vancouver time, and 2:30pm New Zealand time – the broadcast is available on mobiles and tablets.

Next: Georgina Wilson heads to America

After some tough months training in the cold, damp and disgusting weather of the NZ winter and battling a couple of mystery cysts in my leg I have now set foot into the American summer in Kutztown PA.