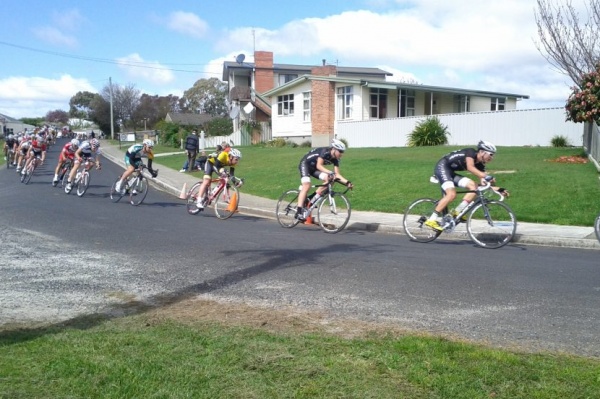 Saturday 5th October: Riders were served with another brutal day on the mountains of Tasmania in the double stage day at the CAT Underground Mining Tour of Tasmania.

Strong winds once again played a big role in keeping the peloton together creating the perfect opportunity for a bunch sprint finish on the final lap during Stage Five.

James “Jimmy” Williamson lead out his captain, Roman van Uden, in the final laps of the race to assist him in the sprint finish.

“Jimmy killed himself leading me out, he rode really well,” said Roman, “He left me to fight on the final lap.”

Stage six was another brutal road race featuring a mountainous climb with reaching 25% gradient in some areas.

Cross winds helped tear the peloton apart but the head winds consantly brought the race back together. Dion Smith, the top placed rider for PureBlack Racing in 26th, said he is feeling really good in his first tour back for the team since breaking his collarbone during the Tour of the Great South Coast in August.

“I am getting better as the tour goes on and starting to find my rhythm,” said Dion, “It is great to be back riding and staying upright.”

The 96km stage from Ulverstone to Penguin started with the first sprint just 3km out of the neutral zone, followed by the first KOM at 8km.

“Within the first 20km of hill climbs and cross winds the field was all strung out, but the head winds eventually brought everyone back together,” said Dion, “There was a massive descent before the big climb of the stage.”

The final climb split up the peloton and a break of 20 riders got away, with Will Walker from Drapac Professional Cycling taking out the stage honors.

“I rolled in the front of the second bunch about one minute thirty behind the lead bunch,” said Dion.

Today is the final day consisting of two stages with a 24km criterium featuring thirty 800m laps, followed by a 75.4km road race from Burnie to Mooreville.

Next: Cameron arrives in Hawaii