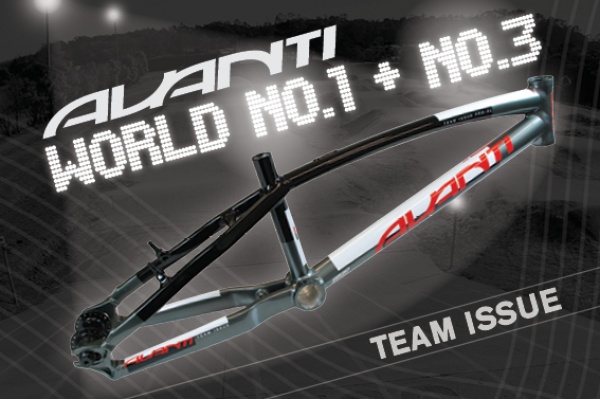 What an amazing night of competition at Vector Arena last night as the Avanti riders competed against the best in the world to secure their places in finals. RMC, Tahlia and Max were all riding in the Cruiser 24" wheel class.

Both Tahlia Hansen and RMC (Richie Mclachlan) were dominating in the Moto’s and the quarter and semi finals. Both coming up with great wins to secure them a good gate in the finals.
Max Macready unfortunately had a serious crash at the finish after his semi final and was taken out by another rider from another heat.  His night ended with a trip to Auckland Hospital in an ambulance with concussion. The good news he has since been released and is at home recovering.

Tahlia got the gate she wanted for the final and had a great start but had to fight all the way to take the win as a couple of riders attempted to block her in the first corner. Tahlia came away with the win and obviously is thrilled. She finished the championship with a 2nd in the 20" (raced on Wednesday) and a 1st in the 24" Cruiser class.  The win was even more impressive since we have learnt that she rode the final with a shattered pedal that wouldn't allow her to clip in. Tahlia has earned the right to now wear #2 number plate on her Avanti Team Issue frame and #1 number plate on her Avanti Cruiser frame.

RMC had us all on the edge of our seats in the final as he unfortunately didn't have a great start and had to battle to make up lost ground over the course. Technique, skill and clean lines enabled Richie to pull himself up to 3rd place. Great finish to his World Championship campaign.

The atmosphere at Vector Arena has been incredible and plenty of support for all the riders as the stands have been filled with family and supporters from over 33 countries. The stadium does have a tendency to increase in volume when any kiwis are featured.

The Avanti expo stand has received over the past week numerous visitors who have shown great interest in the Avanti BMX range which has been on display.  Plenty of American’s have recognised the bike that Sarah Walker rides.  Our sponsored riders of Kurt, RMC, Tahlia, Max and Sarah have been busy with signing sessions and the kids have loved having the chance to talk to their idols.  The Avanti crew has also been kept busy with people wishing to have their Kia Kaha photo which is has been linked to the Avanti facebook page.  Riders will be able to download their Kia Kaha image from the Avanti BMX Heroes tile over the coming days.

Today the track is busy getting a make-over to ensure it gears up for the Pro/Elite riders who are racing on the Saturday and Sunday. Sarah Walker with her arm still currently wearing a brace is still determined to be on the start line and we certainly have our fingers crossed that she is able to compete and finish. She is well aware that if she crashes that her arm/elbow will break and it will be back to square one. So she is under a little bit of pressure and stress right now.

Next: 70.3 Phillipines this weekend

Mabuhay from the Philippines