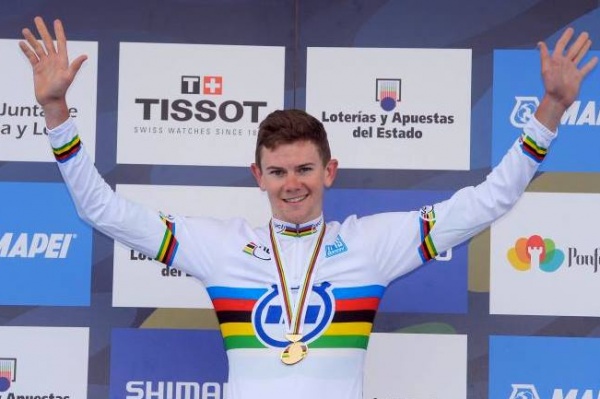 The affable Tasmanian more well known for his selfless tractor work towing his teammates around stepped out of the shadows at the world road championships in Spain this week when he stole the show in the U23 Mens Time Trial. Flakey measured his effort over the 36km course showing a maturity that perhaps wasn’t there last year when he had to settle for 4th.

Coming into the final corner he was still 5 seconds down and he was rapidly running out of road. Out of the seat and back up to speed it looked as though he was going to fall agonisingly short but a last desperate push to the line saw him cross a mere .48 seconds in front of the Irishman and in doing so take the U23 World TT Title!

After the dust had settled Flakey revealed his strategy “I was 20 seconds down at both the checks, but I kept a lot in the tank for the last climb,” he said. “It was super wet out there, so I took all the roundabouts cautiously, and the last downhill with caution, but it was the same for everyone.” he said. “This was my goal, what I wanted, I thought I could achieve I knew it would be close,” he said.  “I knew if had a good ride I would definitely be there.”

The Avantii Racing Team is set up for the sole purpose of developing riders. This result is a great reward for a hard working, talented and humble young man.

Next: Stings at Ironman Malaysia

As far as Ironman goes, we know it's a always a tough race. But when a man who's won Ironman a dozen times is forced to quit before getting into his running shoes, that's another level of tough.