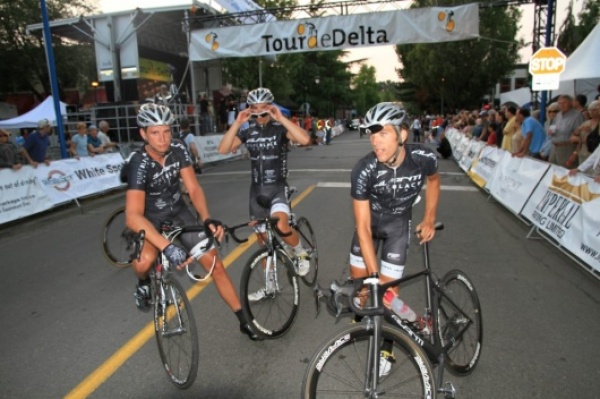 The team stuck together, rode like a team and showed strong presence during the first of two criterium.

“The boys rode really well today,” said Team Captain, Roman van Uden, “we stuck together as a team and managed to avoid the crashes until the last 20 meters.”

Taylor Gunman was unfortunate enough to have to avoid a rider on the tarmac coming into the final corner and ended up hitting the barrier at high speed. Taylor got back up and completed the race.

General Manager of PureBlack Racing, Hamish Mathieson, who is currently in Canada with the team said Roman and Taylor both showed good form throughout the criterium, leading the peloton and chasing the leader for a good portion of the race.

The criterium was won by Green Edge Pro Cyclist, Svien Tuft, who made a break at the 15 lap mark much to the delight of his home crowd.

“He continued to put time on the peloton stretching out to nearly a minute ahead,” said Hamish, “A number of teams tried to reign in the Canadian, but he single-handedly muscled out the chasing pack to finish with a comfortable lead.”

“We were reeling in the breakaway,” said Roman, “Joe did a really good job trying to get up the front but Svien was just too far ahead.”

Day two of the Tour de Delta is another criterium.

Next: PureBlack Racing takes on the best in Canada

PureBlack Racing have an exciting two of weeks of racing coming up in Canada at BC Super Week from the 6th-15th of July.