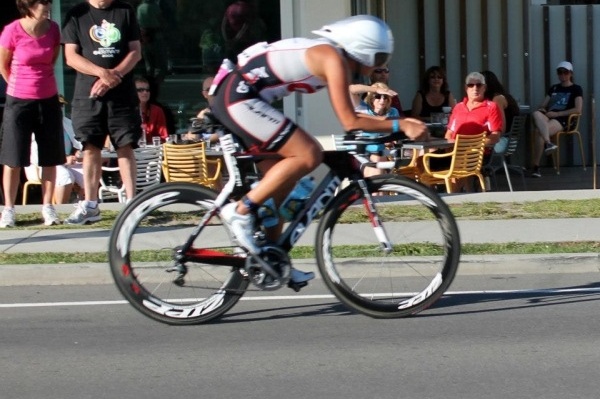 After a bit of a break following the Ironman World Champs in October I built back in to some solid training through November and December, helped of course by some beautiful weather and some extra training time by way of Public holidays and was excited to be racing again!

I headed to Tauranga looking forward to a good hit out on a flat fast course. I DNF’d at this race last year with 2 punctures so I was keen to get some redemption and a good result.

We were greeted with a low-tide for the swim start which meant some crazy currents in the harbour and made navigation around the buoys (and boats) a little tough! I got away to a great swim start and soon found my own space. With such a large field of athletes it’s hard to see where you are at so it just makes sense to put your head down, pick your own lines and push your own pace. I excited the water in 5th place (in the female age-group field) and had a great transition to pass the other girls and exit T1 in the lead. I settled into a good rhythm on the bike and managed to catch and pass a couple of the female pros, indicating that I was riding well. I finished the 90km bike ride in 2hr23, a 7 minute PB on this course and a few minutes up on the 2nd place age-group female.

I exited T2 still in the lead but knowing that some fast runners were going to be chasing me down! I had a solid run and enjoyed heaps of support out on the run course, only to be passed with 2km to go and finished up in 4hr 33, giving me 2nd in the 25-29 age-group, 7th female overall and the fastest age-group female bike split.

I was very happy with my day, it was a 20min PB for me over the Half Ironman distance and awesome to have so many of my family and friends supporting from the sidelines.

The next race for me is the Auckland 70.3 in 2 weeks time. It is a new event for NZ and doubles as the Asia-Pacific 70.3 Championships. Based at the Viaduct Events Centre, it will be a unique opportunity to race in my own backyard and should be an incredible atmosphere! Can’t wait :)

Next: Avanti and Docherty call time on wonderful partnership

Sheppard Industries Limited and Bevan Docherty have reluctantly agreed to end their long and successful partnership as Docherty pursues a new direction in triathlon, racing over longer distances - primarily in North America.