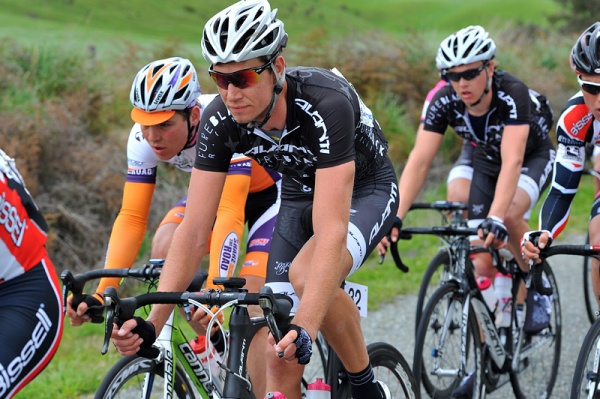 Thursday 1st November: PureBlack Racing continued their hard fought attacks on the yellow jersey today in the Queen Stage (Stage Five) of the Tour of Southland.

James “Jimmy” Williamson, not satisfied with his solo breakaway yesterday showed there was plenty left in the tank, where he saw an opportunity and attack to bridge across to the early breakaway.

“We saw the break go and knew we needed to get someone in it,” said Jimmy, “It was pretty hard to get into, and no one was going to let Roman [van Uden] or Dion [Smith] there so I knew it needed to be me.”

Roman gave Jimmy the lead out and gap he needed to get himself out of the peloton and quickly bridge across to the breakaway.

“It was about to ride away when Roman gave me the jump I needed to get across,” said Jimmy.

The break worked hard in the tough conditions to put an almost five minute time gap between them and the rest of the peloton who were splitting apart due to some crosswinds.

“It was a good break but the peloton didn’t let us keep the time that we needed to have a good shot at it,” said Jimmy, “The wind made it brutal - on the parts of the stage where we should have rolled through and made up time, we didn’t.”

Back down the road, the peloton was in tatters pulled into two major groups, with PureBlack Racing with all remaining riders in the main echelon.

“The boys did nothing wrong today,” said Director Sportif, John “Harry” Harris, “We went out trying to win a stage and keep our position on the GC, we didn’t get the stage but we improved our positions on the GC.”

Jimmy, with nine other riders, stayed off the front for the majority of the stage before getting caught just after Frankton as they approached the big climb up the Crown Range.

“It wasn’t looking good with 30km to go,” said Jimmy, “the guys were getting tired but I was hoping that the solid riders could attack but everyone wanted to stay on.”

When the break was reeled in, the PureBlack Racing team had positioned themselves well to get up the mammoth 1.5km climb.

“With 20km to go, we made sure we were all together and the peloton split at 10km to go,” said Dion, “I was positioned near the front with Taylor.”

“Seven riders went off and set a fast pace up the first 500m of the climb, they were going hard but I decided to sit back and go at my own pace.”

But Dion was feeling good and got the legs going again for the final part of the hill.

“I dug deep and could see the group in front of me, for the final kilometer I went as hard as I could to catch the five guys in front.”

The rest of the team did what was needed in the peloton to protect their positions, with Taylor Gunman finishing 5th and Dion hot on his wheel in 6th.

“Taylor’s ride was textbook perfect today and he is reaping the rewards,” said Harry, “Dion is also riding amazingly in Southland.”

Dion, the youngest member of the team at 19, has had a superb ride throughout the tour and is really enjoying his first Tour of Southland with PureBlack Racing.

“Roman gives me an earful and a hard time in the peloton,” said Dion, “But it is a really solid team and it is great being around a bunch of guys who give great support, it makes the ride more comfortable.”

“This is a really cool tour with an awesome atmosphere,” said Dion.

For Jimmy though, it was another tough day in the saddle, for two stages now he has gone out for battle in the breakaway only to be caught at the last minute.

“It was another long and unrewarding day,” said Jimmy, “It is always frustrating but you never know what is going to happen when you are in a breakaway.”

“Jimmy was unlucky today, he spent 150km stretching his legs, he is timeless in the way he rides,” said Harry, “He is slipping through those gaps like olive oil and a very intelligent rider.”

“All of our riders had an excellent day today,” said Harry.

The stage started off looking like the infamous Tour of Southland weather was going to affect the racing, but 50km into the stage the sky’s opened up and the great weather once again made an appearance.

After five stages, PureBlack Racing has moved to 2nd place on the team GC, with Taylor Gunman the team’s top place rider on GC, 48 seconds back from Bissell’s Carter Jones. Taylor will pull on the U23 pink jersey once again tomorrow.

Next: Today’s Individual Time Trial will be crucial in Taylor Gunman’s bid to wear the Pink Jersey until the end

PureBlack Racing Challenging the International Teams at Tour of Southland