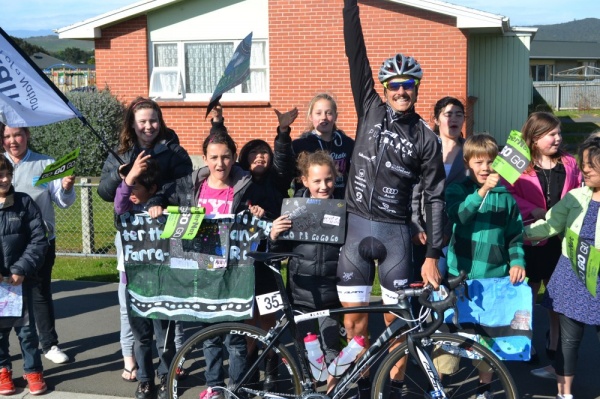 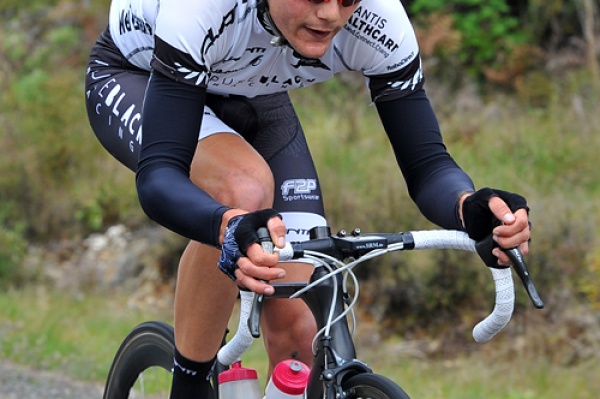 PureBlack Racing fought hard to protect the U23 Pink Jersey, which is still safely sitting on Taylor Gunman’s back but at the while hoping to produce something special for themselves at the same time.

Stage Three began in Riverton, the South Island’s oldest town, where the streets where lined with school children who were supporting their favourite teams.

“We expected a head wind going into Stage Three,” said Roman van Uden, “And when we hit the coast and felt those winds the peloton split.”

James “Jimmy” Williamson and Taylor found themselves in the front split, with Roman and Dion Smith in the second split and Dan Bonello and Cody Canning further back in the field.

“We spent most of the stage 30 seconds off the lead group, we thought we would eventually catch the leading group but we went sure when,” said Roman.

At 10km to the finish, the wind changed to a tail wind giving the second split the advantage they needed to make up the gap to the lead split with 2km to go, making for another split finish.

“I positioned myself too far back,” said Roman, “Dion and I made a good crack at the sprint and I thought it was a really good run but Alex Ray (Stewart Imrie Financial Services) just got me over the line.”

“Considering the devastation the winds caused today we were lucky to not lose any riders,” said Director Sportif, John “Harry” Harris, “Roman was unlucky not to podium but they did an excellent job protecting Taylor.”

Stage Four started with disaster for Jimmy when he required a mechanical in the neutral zone. Once his bike was fixed, the team van helped him back to the peloton who were out of neutral and off racing.

At that stage a breakaway was forming, Cody Canning, PureBlack Racing’s rider from Canada got himself up in the breakaway with four other riders.

Despite this, Jimmy’s plan today was to get into a break and when the problems with his bike started he thought that plan was all over. But he made his way through the peloton to the front and saw a chance to bridge across to the break with a Subway Cycling rider.

“I just took the opportunity to hit it across to the break,” said Jimmy, “The roads were hilly and we were riding on rough roads but we had the momentum to create a decent lead.”

The big moment of the stage was the climb with Blackmount, which split the breakaway apart and left Jimmy with only two other riders by his side.

But at the same time the chasing peloton made a speedy decent leaving the breakaway with only a two-minute gap.

“It wasn’t promising with the gap only at two minutes with 50km to go,” said Jimmy, “When the tail wind hit I knew it was time to crack and the best chance I had was to go by myself.”

So with 10km to go Jimmy attacked and made a hard fought solo effort to get himself to the finish line.

A headwind and a strong peloton being controlled by Bissel Pro Cycling and Barry Stewart Builders – Gordon McCauley Coaching, Jimmy was swallowed up with 2km to the finish line creating a bunch sprint.

“I didn’t think I would get chased down, there was no real reason for them to do so, I thought they might just let me go,” said Jimmy.

“Jimmy was unlucky today,” said Harry, “He drove that race the whole way and completely threw everything out there.”

Roman finished in the top ten in 7th place bringing him up on the individual GC. Taylor is still safely in the U23 Pink Jersey with a 58 second lead on Sean Hambrook. PureBlack Racing is sitting 18 seconds behind Node4-Subaru and one second behind Bissel Pro Cycling on the Teams classification.

Tomorrow is the Queen Stage of the Tour of Southland and is going to be brutal with a mammoth stage from Te Anau to the Crown Range.

Next: PureBlack Racing Continue to Throw It Down at the Tour of Southland

PureBlack Racing Second on Team GC after another Solid Ride