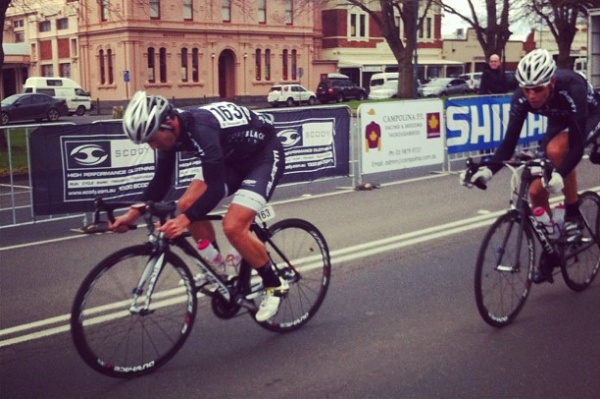 The pair created an early breakaway that stuck for 80km of the 95km road race; unlucky to be caught towards the end of the race.

“We saw a good opportunity to have an attack so we went for it, we just didn’t get enough time between us and the peloton,” said Roman.

“When you are up against Genesys [Wealth Advisors Pro-Cycling] and Drapac [Pro-Cycling], who both have full strengths teams with eight riders each it is always going to be a disadvantage, especially with only three of our guys in the field.”

Genesys and Drapac, who have dominated the Tour of the Great South Coast, were having there own battle in the peloton during the stage for the individual GC. Anthony Giacoppo from Genesys eventually held off Darren Lapthorne, Drapac, by just five seconds to win the tour.

“The big teams did nothing, they just spent the day protecting the GC,” said Director Sportif, John “Harry” Harris

With only three riders from PureBlack Racing making the start line, it was always going to be a challenge to make something of the stage and win.

“The boys really put it out there today, we were the only team to take something to the stage today,” said Harry, “Roman and Joe rode really well, they took it to the Aussies.”
“Roman took control and knew what he needed to do. It was a good day on the high seas for PureBlack Racing.”

Tom Vessey, who has joined the team as part of his preparation for the Junior World Road Championships in September, was the third PureBlack Racing rider who finished the tour and Harry is happy with the way he rode.

“For a 17 year old, in these conditions, Tom did a great job,” said Harry, “it has been tough but he made it through.”

Covering nine stages in five days, the Tour of the Great South Coast has thrown a lot at the team during their first of three tours in Australia.

“Double days are always going to make it hard,” said Roman, “the short stages are more difficult as well, short rides are always less organized within the peloton than longer ones.”

Wild weather caused one stage to be cancelled, and crosswinds and rain have meant grueling rides over the remaining days.

PureBlack Racing now has 12 days to rest and recover before the Tour of the Murray River, which begins on the 2nd of September.

Another rainbow jersey and another gold to add to the collection