Avanti back on top in Tassie - The Aussie versus Kiwi battle was re-ignited when the Oceania MTB Championships were held at Glenorchy MTB Park in Tasmania over the weekend. 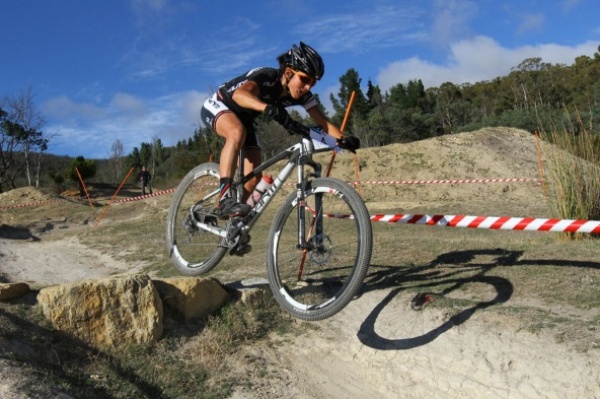 Avanti rider Rowena Fry, riding on her home course, took the challenge up to NZ Olympian Karen Hanlen in the XC Olympic MTB event. Overtaking Hanlen early in the first lap, Rowena built up a solid lead by lap two. An untimely crash on the dry skatey descent slowed her progress and by lap four Hanlen was back on Rowena's wheel. The World Class climber proved too strong on the final lap and Rowena held on to take a well deserved Oceania silver medal.

The following day saw the exciting XC Eliminator Title decided. Having achieved a World Cup Podium in 2012, Rowena was one of the favoured riders in the fast and furious knockout event. Qualifying 2nd fasted in the time-trial she made it though unscathed winning her semi-final comfortably. The final saw 4 riders battle it head to head. A furious start saw Rowena in good position sitting second wheel and looking ready to pounce in the back half of the course. Following closely behind Em Parkes into a loose, gravel corner, Rowena utilised all her evasive skills as Parkes crashed in front of her. She managed to keep upright and regain momentum to stay in ahead of the 2 chases and motor to the line securing the Oceanic MTB XC Eliminator Championship.

All achieved aboard her 2013 Avanti Competitor 29er Team Hardtail.

Next: Walker to Ride Avanti at 'Home' World Championships

London Olympic silver medal BMX rider Sarah Walker will proudly carry a brand synonymous with New Zealand cycling at July’s UCI BMX World Championships in Auckland with news that Avanti is once again set to make its mark in the world of BMX.